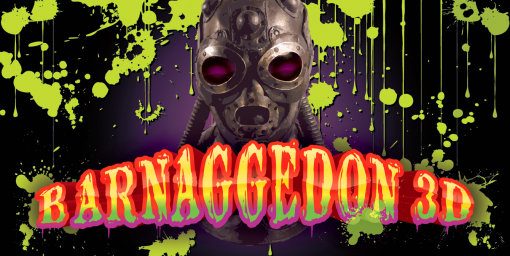 The workshops at Dunnington lodge became a hotbed of industrial activity during the time that the circus was on the farm. Men wearing masks braved the heat and smoke to try and make Charlie’s mechanical visions come to life.

Most of them perished when Old Grey, the bull elephant crashed into the buildings as the great fire raged. Steam pipes burst, gas fires erupted, bodies were crushed and trapped.

As the fire raged the roof collapsed, and the cellars under the barns gave way, sucking everything into a subterranean world of chaos.

Now, enter the kaleidoscopic world of Barneggedon 3D. Put on your 3D Glasses to reveal a perplexing, space shifting world, where your eyes can't be trusted to seperate what's real from illusion.

Will you make it out alive from the horrors of BARNAGGEDON 3D!!!

He’s trying to cross his fingers for Hallowscream to win “best event of the year” at the York tourism awards tonight !!